THRILL (n.m.):
Subtle blend of nervousness and excitement that causes an intense sensation

13th Street presents a unique profile in the Belgian landscape, which is distributed by Voo and Proximus. Its major assets: a very PRA profile (75% of the audience), young, active (44% of the audience) and selective on the female target (63% of the audience). 13th Street will attract a market share of almost 2% during the day and 3.4% in late night (Target PRA 18-54). 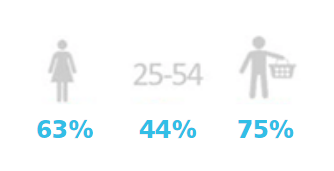